In my last post on Ready Steady Play (RSP), I talked about the various mini-games that are included in the app and how they are not necessarily representative of any true old west that existed.  In an article by Heikkinen and Reunanen in 2015, themes of Western video games were compared and analyzed for trends.  Several of the these themes and trends applied to RSP, so I thought I would discuss them here.  The first game – Shooting Gallery – is remarkably similar in appearance to some of the earliest Western style games.  The image on the left shows a game with almost the same layout, including a depiction of how many bullets remain.  RSP also focuses on Western stereotypes of gunslingers, though without necessarily pinning the player to either the sheriff or the outlaw character type.

One trend of Western games is the homogenization of characters, especially across racial boundaries.  Heikkinen and Reunanen identified several games where this was an issue, but I think RSP is an interesting case because of the way in which its characters are homogenized.  As seen in the screenshot below, your avatar looks exactly the same as the enemies in the game.  Even the women and children are styled in the exact same way that the male characters are.  I stated previously that I don’t believe RSP reflects the West with any realism, but I think it is at least interesting that the developers made 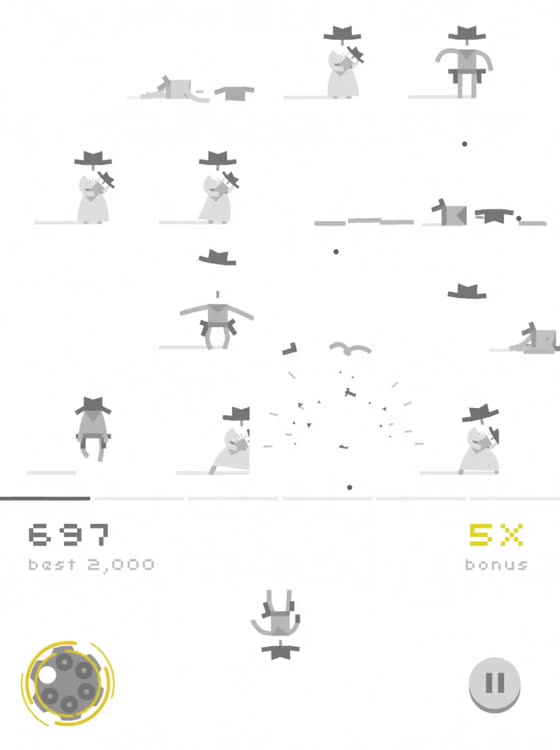 this choice.  I imagine that it comes as a by-product of their minimal design, and possibly their minimal resources as an independent development company that mostly creates animations for other companies.

In some ways, RSP comments on previous Western games by subverting expectations.  In Hobby Hurdles, another one of the mini-games, your avatar rides a stick horse instead of an actual horse.  This both fulfills the trend of Westerns involving some sort of horseback riding, while also acknowledging that this is just a silly game and not a simulation of reality.

Heikkinen, T., & Reunanen, M. (2015). Once Upon a Time on the Screen – Wild West in Computer and Video Games, 36. http://widerscreen.f
i/numerot/2015-1-2/upon-time-screen-wild-west-computer-video-games/
« Physical Story Arcs in Journey
Playstyles in Just Cause »